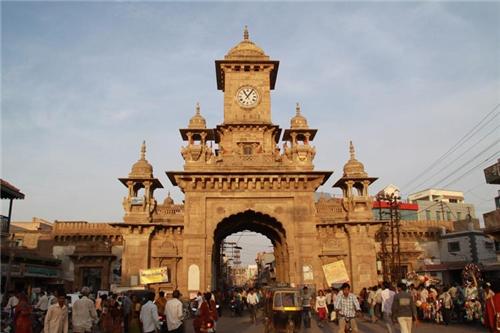 Morbi, also known as Morvi, is located in the Saurashtra region of Indian state of Gujarat. The name of the city literally means City of Peacocks. The town Morbi is endowed not only with great natural beauty, but it is also famous for its colorful history and rich cultural heritage. Indeed, the numerous architectural edifices that have stood the test of time, speak gloriously about its rich past and because of them, the town is often referred as Paris of the East.

According to traditions, the area was initially a part of State of Cutch. When Kayanji of Bhuj dynasty established the independent state of Morbi, he gave this name to the city. However, the present status of the city is no less enchanting. Apart from being a district headquarters, it is also well-known for its ceramic and clock manufacturing units.  Let us therefore, peep into the different aspects of the town.

Morbi, as we have said, is located in the Saurashtra region of Gujarat. Geographically, it falls in Kathiawar peninsula located in the western part of the state. The region has black soil, which is ideal for growing cotton. Besides, the area also produces a good harvest of nuts. River Machchu, which originates from Madla hills and disappears in the Little Rann of Kutch, flows by this town. The area is hot in summer with temperature rising up to 42°centigrade. In winter it varies between 10°centigrade and 24° centigrade. Read More

At present, Morbi is the headquarters of a newly carved out district of the same name. Historically, it has been a princely state under the Jadeja rulers. After independence, it became a part of the United State of Kathiawar, which was later renamed as Saurashtra State. However, in 1956, Morbi along with the northern part of the Saurashtra became a part of Bombay State. On 1st May, 1960, the Bombay State was again bifurcated on linguistic basis into Gujarat and Maharashtra. Since then, Morbi has been a part of Rajkot District of Gujarat.

The next important date in the political history of Morbi was 15th August, 2013. On that very day, the area surrounding Morbi was carved out of Rajkot district to form a new administrative entity. The newly carved out district is called Morbi District and Morbi city became its headquarters. Read More

Business and Industry in Morbi

As we have already pointed out, Morbi is the center of ceramic and clock manufacturing industry. The units around the city produce around 70% of the gross ceramic production in India. It also exports a large amount to different countries. In fact, 5% of the world’s requirement is met by these units.

Morbi is also a center for clock manufacturing industry India.  World leaders such as Ajanta Clock, Sonata Industries, Samay Clock, Sonam Quartz etc have their units in this region. Another interesting fact is that most workers in the clock industry are women from nearby villages. Besides, there is also a paper mill producing different types of paper in the city. Read More

Places to Visit in Morbi

It is sad that the flood in 1979 and the great earthquake of 2001 have destroyed many of the historical edifices of the town. Fortunately, Mani Mandir is also well known as Willingdon Secretariat or Wagh Mahel, Nehru Gate, Green Towers, Jhulta Pul ( Suspension Bridge) are few of the historical edifices that have stood the test of time to tell us about the town’s glorious past. Read More

Morbi is the birth place of some eminent personalities in India. Among them, we can name Dayananad  Saraswati, the founder of Arya Samaj and  Shrimad Rajchandra, a prominent Jain poet, philosopher and scholar. While Dayanada was a Hindu reformist, Rajchandra was Mahatma Gandhi’s spiritual guide.