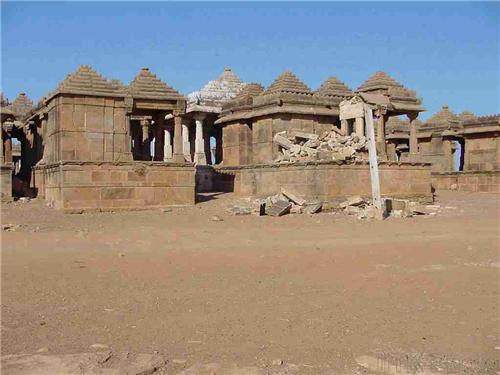 Halvad is located at the southern edge of Little Rann of Kutch at a distance of forty-six kilometer from Morbi. The town is part of the socio-cultural phenomenon that represents this part of Gujarat. Therefore, a visit to Morbi can never be complete without a visit to this city.

Since time immemorial, the area was ruled by the Jhala kings. They initially had their capital at Kuwa. However, a bloody war in 1479 not only killed the king, but also destroyed the city and the Jhalas were forced to look for a new capital. It is said that Rana Rajdharji, the eighth son of the dead king went out for hunting and was surprised to find a hare confronting him.  He decided to establish the new capital at that very spot.  The place began to be called Halvad and in 1488, the new capital was established there. However, after the death of Rana Rajdharji, conflict among the heirs of the throne arose. Ultimately, Saratanji Jhala, the heir apparent to the throne shifted the capital to Wankaner.

Halvad is unique in many ways. To realize its full charm one has to come here before the sun rises above the horizon. Indeed, the town is something to behold early in the morning. Unlike in Morbi, the soil here is yellow in color. Moreover, most of the houses are built with locally found yellow sandstones. As the sun rises, the town effuses a vibrant golden yellow glow, which is something to witness.

Places to visit in Halvad

Halvad has many places of tourist interest. Among them, the Royal Palace comes first. Besides there are numerous temples, dargah, chhatris and cenotaphs to admire:

Temples, Dargah and Chhatris in Halvad:

Halvad is famous for its many temples. Most of them are dedicated to Lord Shiva; hence, the town is also known as Chhota Kashi. Among them, Sharaneshwer Temple, Gaulokeshwar, Shabaleshwar, Kashiwishvanath, Dholeshwar and Vaijnath encircle the city. Inhabitants believe that these temples protect them from all evils. Besides, there are the Bhavani Temple and Bhuteshwar Mahadev Temple, located at the cremation ground. These two temples are said to be more than 500 years old.

Among also these temples, Sharaneshwer Temple, located on the bank of Samatsar Lake, is most famous.   Maula Qazi is another pilgrim place, located on the western bank of the same lake. In essence, it is a dargah and a pilgrim spot for the Dawoodi Bohra community, but in reality it is revered by all religious groups.

Apart from these temples and dargah, there are many chhatris located in different parts of the city. These chhatris have high plinths, carved columns and corbelled roof in the shape of a pyramid.  Incidentally, corbelled roofs refer to an overlapping arrangements of stones (or bricks), with each course projecting over the course below. 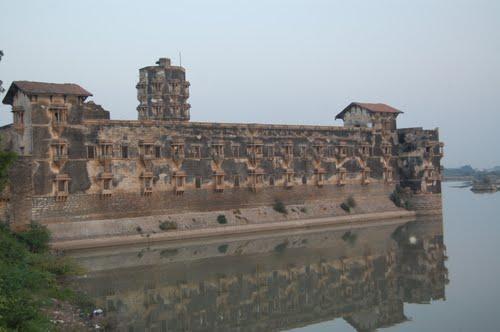 On the bank of the same lake lies another piece of ancient architecture. This is the royal palace of Halvad.  Because of the presence of an observational tower at the center, it is also referred as Ek Dandiya Mahal.

As the visitors enter the palace through a magnificent gate, a wide courtyard adorned with wooden columns, friezes, jails greet them. The palace also has temple dedicated to the deity of the royal family. A hall meant for the public and the adjoining garden is also worth a visit. Many government offices are also located in the premises.

The jharokas, behind which the royal ladies used to sit for a view of the lake, reminds us of the Rajput architecture. The intricate designs made on sandstone have to be seen to be believed. Another important structure in this premise is the tower we mentioned at the very start. It is called Jalwa Darshan. This octagonal tower with jharokhas in all directions offers a fantastic view of the surrounding area.

Cenotaphs, locally known as paliyas, are located at the edge of the town. They remind us of those brave heroes who shed their blood to protect their land from invasion of the foreign force and also of the brave ladies who gave up their life to protect their honor. Newly-wed couples often come here to untie their nuptial knots.

However, Halvad is more than just a historical place. At present it is the headquarters of a taluka of the same name. Therefore, it is equally important from the administrative point of you. It has a municipal council to look after its civic needs. In short, at Halvad the past has successfully amalgamated into the present.