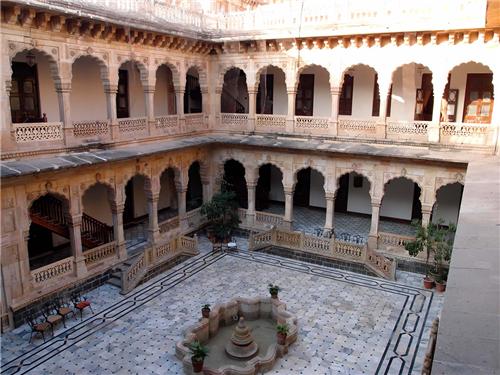 The history of Morbi is interlinked with the history of the princely state of Kutch. The whole area had been under the rule of Jadeja dynasty for many centuries. Although it is largely believed that the Jadejas belonged to the Yadav or the Chandabansgshi Dynasty and are directly related to Lord Krishna, many scholars are of the opinion that they actually belong to the Samanta Rajput Tribes. It is believed that a section of the tribe had settled in Sindh many centuries ago. Lakho Jadani, who founded the kingdom of Kutch in 1147, was a member of that Tribe.

Tale of Lakho Jadani and the Kingdom of Kutch

However, it is believed that Jadani was not the original title of the Jadeja rulers. As per hearsay, Lakho jadani was adopted by a man called Jam Jada; hence he began to be known as Jadani. He ruled the area from Lakhiarviro, which is located near present day Nakhatrana. It was rule that the eldest son would sit on the throne and rest would become a part of Vayaat or Brotherhood. However, this often led to internal conflicts. One such conflict in the end of seventeenth century led to the birth of Morbi.

Death of Rao Raydhunji and birth of Morbi

Rao Raydhunji ascended the throne in Kutch in the year of 1665 and died in 1668. He left behind three sons. Among them, the eldest Ravaji was killed by Sodha Rajputs leaving behind one son called Kayanji. Although Kayanji was the rightful owner of the throne of Kutch, his youngest uncle usurped it. Kayanji, along with the widowed queen of Ravaji, was forced to flee. He came to Morbi and made it independent of Kutch. That was 1698. His descendents, who began to be known as Kaynani, ruled over the state until it merged into independent India.

1807 is another important years in the history of Morbi. That year, the state became a part of Kathiawar Agency of the Bombay Presidency and a protectorate of the British Empire. Although the kings were otherwise independent, they had no say in the matter of foreign policy and defense. The Crown of England had all the power and jurisdictions in such matters.

One should understand that out of 193 states included in the Kathiawara Agency, Morbi fell within the first class order and was entitled to 11-gun salute. The others in the category were Bhabnagar, Dhangadhra, Gondal, Jafarabad, Junagarh, Nawanagar and Porbandar. All these states were under the suzerainty of the Bombay Presidency. A Political Agent oversaw the affair of all these states on behalf of the Governor General.

The Thakur Sahibs of Morbi

In spite of the fact that the rulers of Morbi were under the direct supervision of a Political Agent appointed by the British, they had certain independence, these rulers were known as the Thakur Sahibs. As we have already mentioned, the kingdom of Morbi was established by Thakur Kayanji in 1698. He ruled over the state until 1733. Following are the names of the kings who sat on the throne of Morbi from 1730 to1870:

1870 is another important year in the chronology of Morbi. That year Waghji II Rawaji died leaving behind a thirteen year old son. Since the heir to the throne was still a child, a Regent was appointed by the British Government to rule over the state. Waghji came to the throne in 1879 and from the very next day, he began to work for the property of the state.

Waghji was a man of vision and he understood that it is not enough to grow crops; it also has to reach the proper market. Therefore, he immediately set out to build a railway network in Morbi. He also realized that a state can never prosper unless the people were well educated and healthy. That is why building schools, colleges and hospitals was also a priority for him.  In addition, he set out to beautify Morbi. Many historic buildings have been attributed to him.

After the death of Waghji in 1922, his son Lakhdirji Waghji came to the throne. Lakhdhirji also shared his father’s vision for a better Morbi. He continued working for the prosperity of the state. He built a power generating station and a telephone exchange in Morbi. Besides he also built many schools, colleges and temples.  Moreover, he laid much stress on technical education and built n engineering collage to impart engineering skill to the young men of his state.

India became independent on 15th August, 1947 and along with rest of the states in Kathiawar District, Morbi merged into India. In the beginning Morbi was a part of the United State of Kathiawar, which was later renamed as Saurashtra State. In 1956, Morbi along with rest of Saurashtra became a part of Bombay State; but when Bombay was bifurcated into Maharashtra and Gujarat in 1960, it once again became a part of Gujarat and a taluka under Rajkot District.

However 15th August, 2013 ushered another change in the history of Morbi. The district of Morbi, with the administrative headquarters located in Morbi city, was created on that very day. The district has five talukas - Morbi, Malia, Tankara, Wankaner and Halvad.

Morbi underwent two big disasters; one in 1979 and the other in 2001. In 1979 the Machchu Dam 2 burst open and within two hours the city was under water. Approximately, 12000 people and unknown numbers of animals died in that flood. In 2001, a great earthquake shook the city. This time too there were immense death and destruction. Many of the city’s heritage properties were damaged by this earthquake. However, on each occasion, people of Morbi did not take long to start afresh. The spirit of Morbi lives on and today it is better protected and safer place to live in.