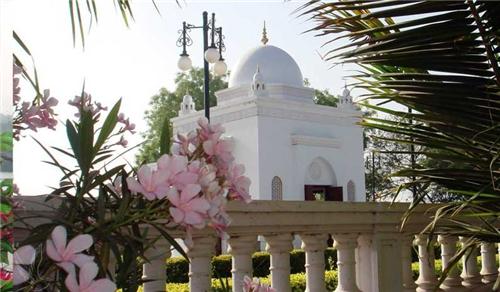 There are numerous places of worship in and around Morbi. While most of them are Hindu temples, there are also a significant number of places of worship dedicated to other communities. For example, Bilali Masjid at Shakti Plot is the biggest mosque in the city. The Dargah of Maulana Qazi in Halvad is another renowned place of pilgrimage. Located at a distance of 46 Km from Morbi, this dargah attracts devotees from all faiths and communities.  Similarly, the Molai Rajsaheb Dargah is another such place visited by devotees from all over the country. It is located on the ancestral property of Maulaya Raj Bin Maulaya Dawood (QS) in Sardar Nagar in Morbi.

It is said Maulaya Raj Bin initially lived in Patan, which is located at a distance of almost 220 Km from Morbi. However, his ancestral home was located in this very town. His father Maulaya Dawood was the Amil of Patan and after his death Raj Saheb was appointed to the post by Wali-Al-Hind. It was in the middle of the fifteenth century AD during the period of Syedna Idris Imaduddin (R. A) of Yemen.

However, due to constant enmity of Jaffer Laeen, who not only harassed the members of the Bohra community, but also destroyed their valuable books, Raj Saheb had to leave the place and settle in his ancestral home in Morbi. There he led a devout life offering timely namaz and earned his living by weaving cloth. He also built a mosque and dug a well to help in ablution.


The story of Well that Maulaya dug

There is a very interesting story about this well. As we have already said, Maulaya Raj earned his living by weaving cloths. However, in spite of his busy schedule he never missed a Namaz.  But one day he decided to finish his work before offering the Namaz. As he finished his work he went to the well for the Wuzoo (ablution). He lowered the bucket for water; but to his surprise, instead of water, a bucket full of valuable jewels came up from the well. He threw them back into the well and again lowered the bucket. This time too jewels instead of water came up from the well. This happened a third time. He immediately understood what happened. He then asked for pardon from Allah and begged for water. This time, water instead of jewels came up in the bucket and Raja Saheb could ultimately offer his prayers.

From this Maulaya Raj Saheb learnt a lesson he never forgot. He led a devout life and earned the blessings of Allah, who honored him with nine Duat Kiram in his lineage.