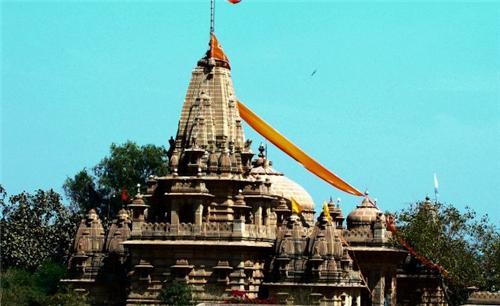 Morbi, located on bank of river Machchu, is home to numerous places of worship. The town is dotted with temples, mosques as well as dargahs.  Among the numerous temples that sprawl across the city, the Rafaleshwar Shiva Temple and Mani Mandir are two most famous places of worship for the Hindus. Let us take a look at the different temples in the city.

Rafaleshwar Shiva Temple, located at a distance of 10 Km from Morbi Railway Station, is a famous pilgrim center in whole of North India. This particular temple was built by Maharaja Lakhdhirji Thakor in 1946. It is a fine example of Hindu temple architecture followed at that time. Apart from the presiding deity, the temple also houses four more Shiva Lingam.

Although the credit of building this magnificent temple goes to King Lakhdhirji, inscriptions and restored plates indicate that the temple may be much older.  The original temple had most probably been built by a king named Ripu and later it was renovated many times by subsequent kings. Another interesting point is that, while the presiding deity is said to be a Swaymbhu Lingam, four others have been installed by different kings at a later period. These installed deities bear the names of those kings.

It is believed that King Ripu built the original temple around the Swaymbhu Lingam. Incidentally, Swaymbhu Lingams are those lingams which have come up on their own; they have not been installed by anybody. Consequently, they are much revered by the devotees of Lord Shiva. Rafaleshwar Temple is no exception to that. It has a steady queue of visitors throughout the year.

However, on the New Moon day in the month of Shravan, the temple is visited by thousand of devotees from different parts of Gujarat, Rajasthan, Maharashtra and Madhya Pradesh. A three day mela or fair is organized on that occasion. Devotees also throng this temple during Shraddh Paksha (Mahalaya Paksh) to pay homage to their departed ancestors.

Mani Mandir is located in the courtyard of the Wellington Secretariat, just outside the fortified old town of Morbi. It was built in 1935 by King Waghji Thakor in the memory of his queen Maniben. The temple has been made out of yellow sandstone brought from Rajasthan. Delicate carvings, arches, brackets, jails, chhatris and shikharas make this temple a unique architectural heritage. Among the deities installed in the temple are Radha-Krishna, Lakshmi-Narayan ji, Lord Rama, Mahakali and Lord Shiva.

The temple along with other historical structures of the town was significantly damaged by the Bhuj Earthquake of 2001. It has now undergone a seismic retrofitting with minimum intervention. The heritage character of the building has been kept intact as much as possible.

Some other Important Temples in Morbi

Apart from the above mentioned temples, there are many other places of religious interest in the city. Most of these temples are dedicated to Lord Shiva and Lord Hanuman. Let us take a look at the different temples located in the different parts of the city.

Following are some of the temples dedicated to Lord Hanuman in Morbi: